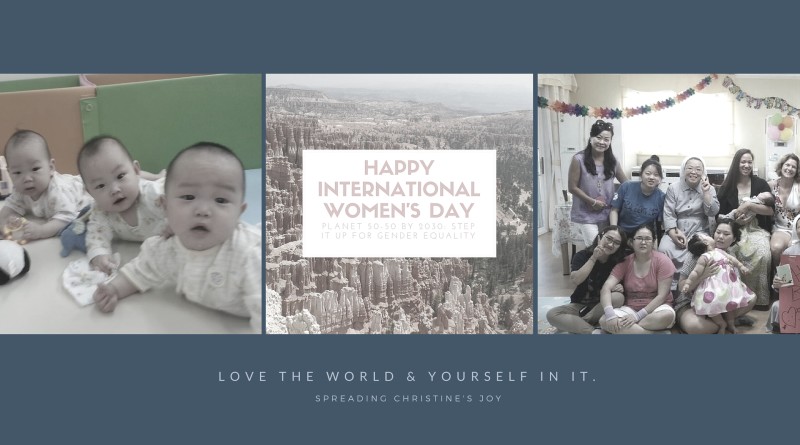 Wife of a retired Army Soldier, Christine Joy, is doing her part to spread Joy by volunteering and sharing donations throughout South Korea.

Christine first came to South Korea in 2004 as the spouse of a US Army soldier. She quickly fell in love with the people and culture, and happily became involved with many activities and groups.  It was through the American Wives Club that Christine first began volunteering at Eastern Seoul Welfare Society (ESWS), and learning about orphanages and adoption in Korea.  Initially she would volunteer a few times a month.  In 2008, after the tragic loss of her sister, Christine discovered her passion in helping others as a way to cope with this traumatic life event.

“Volunteering at the orphanage was therapy for me,” Christine confided.  “their need for love and my need for comfort met on equal ground; healing was the natural outcome. I would come every  week and help out.  The smiling faces of these babies can make anyone feel good. I like to tell folks; this is the best therapy money cannot buy!”

After  a brief return to the U.S.  in 2009, her husband’s job as the Deputy Program Manager for the SKEC managed Yongsan Relocation Project brought them back to South Korea in 2011   and  she has spent over seven years living here in total.  .

As Christine spent more of her time helping the orphans, she began to learn about the great need for volunteers.  In addition she found that donations for organizations helping single mothers and orphans throughout Korea were necessary.  Today Christine’s calendar is filled as she volunteers throughout South Korea and collects donations.

“I have a gift in fundraising.  I have worked  with some amazing volunteers to set up a donation center in Hannam Village where people can drop off their donations and have wonderful donors throughout Pyeongtaek, Anjung-ri , Osan and Yongsan.   We collect everything from children’s clothing, maternity wear, toys, diapers, formula, food, breast pumps, cash – you name it, we can find a use for it.  From there everything is sorted and distributed to where it is needed.”

Christine is a weekly volunteer at the orphanage run by ESWS near Hongik University in Seoul.  She also volunteers at the Vin Home in Yong In.  The Vin Home is a residence for unwed foreign mothers facing domestic issues.  The organization is run and funded by Catholic Charities.  Currently South Korea has no government aid for foreign single mothers.  Here Christine is a friendly face and helping hand.  She also cooks dinner for the women and their children twice a month.  Christine also volunteers at the Pyeongtaek Welfare Town orphanage every Tuesday playing with the toddlers.  This location is where orphans go who are not placed in a forever or foster home.  Children range in age from 2-18 years old.

Through volunteering Christine has also been educated in the cultural issues in Korea that lead many natives to reject adoption.  The purity of race through bloodlines and paternal family ties is extremely significant in traditional Korean society.  For this reason orphans who have an unknown bloodline, children of mixed race and the fatherless struggle to be accepted in Korean society.

For years after the Korean War, South Korean babies were adopted by parents living in Europe and America.  From 1999 to 2011, U.S. families adopted 18,605 Korean babies.  Wanting adoption to become more localized, new laws were put into place in 2012.  Korean officials wished to make a greater in-country foster care and adoption program which led to international adoptions becoming the last resort.  The new law only allows foreigners to adopt children if the Korean government fails to put them in foster care after two years.

Since the law was placed into effect, Christine has done her part to work to change the stigma of adoption amongst Korean people.

“These children need their forever home.  Although Korea has organizations set up like the Pyeongtaek Welfare Town, children are still missing out on common everyday experiences.  They never get to go to the grocery store with mom, or take the bus into town.  These little memories become a significant part of the shaping of a child’s life.  Children need a proper education.  We don’t know what is between these children’s ears unless we give them a fair chance.  The cure for cancer is in between a child’s ears, and it could very well be an orphan.  If we cannot change the Korean law, we must work together to change the negative connotation that goes with adoption in this country before it is too late!”

Christine is currently working on a new fundraising effort called ‘Pass the Bottle’.  Over-sized baby bottles are given out with charities’ banking information on them.  An individual takes a bottle and can empty their pocket change or any donation they feel appropriate into it.  They then pass it on to a friend or family member who is asked to do the same.  Once the bottle is full, the recipient can take it to a Standard Charter Bank where the money will be placed in the charity’s bank account.  It is a simple way of making a big difference through pocket change!

It is heart-warming and encouraging to learn how big a difference Christine has made in the country of South Korea which she now calls home.  If you are interested in volunteering or donating to one of these charities, please visit their Facebook page!