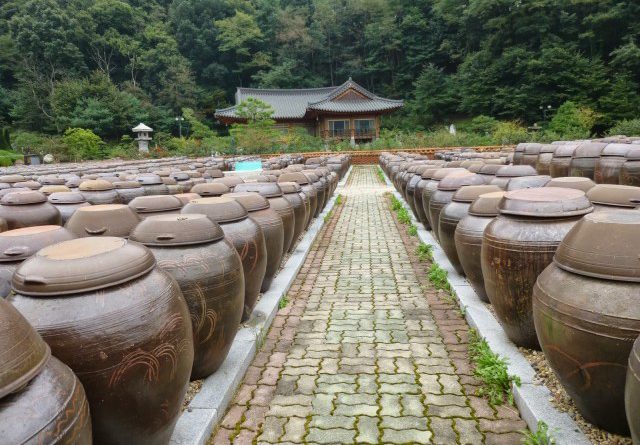 Korean food continues to grow in international popularity, however, few foreigners venture outside of .  Saturday, September 28th I attended an unforgettable trip with SIWA (Seoul International Women’s Association) that guided us to Dweeungbark Geoul Bean Village, to learn about the origin of Korean food culture.

With Korea’s fast moving economy, huge restaurant industry, and impressive speed of industrialization, it is hard to think of an area that is not expanding in the country.    Outside of Seoul, the world’s second largest metropolitan area, you can find a culture of people that continue the farming and food processing of their ancestors. The majority of farms are still small-scale family run operations with fields ranging from 2.5-5 acres.  In these small farm villages, kimchi and soy sauce are still fermented in clay pots that have been passed down for generations.  Restaurants serve local food that is picked from Korean fields the same day.

Dweeungbark Village, in Sejong City, is a working farm and Korean paste village that has been renovated to educate the public about traditional Korean farming and healthy eating.  The village is located about 1.5 hours from Seoul.  In Dweeungbark Geoul, mountains surround bean and rice fields creating an enchanting and relaxing atmosphere for a day outside of the city.  The village has over 1,700 jangdok (clay jars) lined up as they ferment pastes and soy sauce.  Here you can also find a restaurant specializing in fermented food, the first Korean pastes museum, walking trails and a sculpture park.

Our tour began in the soy bean fields of Dweeungbark.  Farmers led us past rice patties to hundreds of rows of bean stalks.  In the field several u-shaped knives were passed out and we took turns chopping down stalks.  Once our crop was harvested, we picked up piles of the stalks.  A tractor hauling a wagon arrived to bring us into the village.

At the village, we carried our bean stalks to a covered pavilion.   Village elders immediately began plucking off the stalk’s leaves and throwing the beans into a massive boiling pot.   At this point, each guest was given an apron and our first cooking class of the day began.

Our first class covered how to make a foreigner friendly Doenjang, fermented soybean paste.  Doenjang is made from boiled dry soybeans that are stone-ground into a paste.  The paste is formed into blocks called meju.  The blocks are then put in the sunlight to dry.  At this point, dried rice plants, that are rich in bacteria are attached to the surface of the blocks.  This begins the fermenting process.  After about three months, the meju is put into clay jars with brine for further fermentation.  Good bacteria transform the blocks into a vitamin-enriched product.  Once the product is ready, liquids and solids are separated.  The liquid becomes Korean soy sauce. The solid is the finished Doenjang which is a staple ingredient for many Korean dishes.

Donenjang is very strong for many foreigners.  For this reason, we added several ingredients to make it more pleasing for our palate.  Ingredients included garlic, spring onion, green pepper, sesame oil, mulyeot syrup, mashilcheong syrup, and gochujang.   After dicing vegetable we stirred all the ingredients together to create the paste.  The majority of the paste was bottled to take home for our personal use.  We kept a small amount out to prepare lunch.

Lunch consisted of pork that was covered in our Donenjang paste and pan fried.  The local villagers also prepared an amazing spread of farm fresh traditional Korean food.  What was described to us as a humble farmers lunch, was certainly a feast!  We were served several kinds of kimchi, rice, battered zucchini, a variety of potatoes, chestnuts, soup, and an assortment  of other small dishes.  Everyone was very satisfied after a delightful fresh lunch!

After lunch the group toured Dweeungbark Village.  The village is beautiful with statues and clay jars on display throughout it.  The original kimchi pots from the families’ ancestors are not currently in use, but they are still on display in the village.  Each building is traditional hanok fashion including the paste museum, which is the first of its kind in Korea.  The most impressive area of the village has to be the 1,700 jangbok jars that are still being used to produce fermented products.  They are lined up on a grand terrace with platforms for viewing.
Korea’s major cities to have a firsthand experience with the true origin of Korean food culture. The metropolitan government has teamed up with local farm villages, and a company named ‘Happy Busday’,  to create a hands on learning experience about farming in Korea

After our tour we returned to the pavilion for another cooking class. Our soybeans were done cooking.  Each group of guests was given a full soybean stalk to shell ourselves and eat.  The beans were fresh and delicious. The remaining beans had already been shelled by the villagers. They placed massive scoops into wooden mortars with pestles.  The mortars and pestles were so large that they were free standing on the ground and stood about three feet above the surface.  We took turns smashing the beans and turning them into paste.  Once the beans were crushed, we shaped them into meju blocks.  Each guest was allowed to take their meju block home.

The final cooking class was sweet rice cakes.  Fresh rice from the patties was boiled and placed into the mortars.  The rice was much more difficult to smash than the beans.  A female village elder demonstrated how to make the paste by taking the giant pestle and raising it over her head.  She swiftly lowered her arms and smashed the rice with great force.  We continued to do this for about ten minutes until the rice was transformed into a sticky dough. The dough was flattened out on trays and divided.  Powders for flavoring were added to the cakes and they were then ready to eat!

The memories from this trip to Dweeungbark Village will remain with the entire tour group throughout the years.  Seeing the way of traditional Korean farming, and learning how to make these timeless products, provided a new appreciation for Korean food culture. “It is important to remember that food doesn’t come from e-mart.  We need to see it from the ground, especially after things become more and more processed. Everything here was so delicious and fresh,” concluded SIWA president Terri Hartman after the day’s events. Learning about Korean food culture through a trip to Dweeungbark Village is an experience for all ages.

Wearing a Wedding Dress at an Evacuation Shelter