On Friday morning I went to Lotte World!  Lotte world is considered the world’s largest indoor amusement park.   It is open year round.  The indoor amusement park houses small and large rides alike.  It also has an ice skating rink!  In 1989 an outdoor addition called “Magic Island” was also added to the park.  The park has a movie theater, folk museum, shopping mall, sports stadium and monorail.  It also sits right on Seok-Chon lake.

The amusement park is located right in Seoul.  You do not even have to leave the city to have a day of thrills!  You can reach it on Line 2 or 8 at Jasmil Station.

Friday May 17th was opening day of the outdoor section of Lotte World.  A great thing about Seoul is they have a huge variety of link-up and networking websites for people of all interests and hobbies.  This may sound a little bit scary, but because Seoul is such a safe city these websites can be utilized (taking normal safety precautions)  without fear.  On Friday I found three Korean girls who were going to Lotte World and met them to spend the day there. As I got off  the train at Jasmil station to meet my new friends I was instantly transported to Rome.  Why you may ask?  At exit 4 of Jasmil station there is a replica of the Trevi fountain!  Although it is smaller then the real thing it is very realistic and amazing!

My new friends were great company for the day and we enjoyed a bunch of fun attractions at the park. They also got me into Lotte world for a reduced rate of $10.00 instead of the normal $40 because they knew about a promotion that was going on! Score!  Lotte world also has a lot of great food at relatively inexpensive prices.  For lunch I had a hot dog with bulgogi (Korea thinly sliced meat) on top!  It was very interesting.

On of my favorite rides was the elevator ride that lifts you about 20 stories and then drops you all of the way down.  I liked this ride not so much for the falling part, but as you are lifted to the top story the ride spins around giving you an amazing view of the park and city!
In addition to riding rides there was also a parade full of Lotte World dancers and characters in the middle of the day.  It was fun to watch even for us big kids! After going to Lotte world the girls took me to get Sondae.  I know what you’re thinking- ice cream! Yum! But not quite.  Korean sondae is a sausage made of cow or pig’s intestines.  I had seen sondae before in Korea but didn’t think it would be anything I would be interested in trying.  Thankfully I am an adventurous eater so I decided to give it a try.
The girls lead me to the Sillim subway station on line two where we went to what is called a sondae village.  The village was about three stories tall and only had Hangeul writing on it.  I would have no idea what the place was if it wasn’t for my “tour guides.”  We walked in and there were tons of Sondae shops inside.  My friends said they had been going to the same one for about eight years. After we walked upstairs and sat down we were given glass soda bottles of fanta and coke to share and aprons to wear.
The women at the shop cooked two large plates of different types of Sondae and then placed the large plates on burners that were sitting at our table.  Korean dishes are often communal.  You use your chopsticks to take what you’d like and put it on a small plate in front of you. The sondae was cut into small slices and served with cabbage, noodles, rice cakes and mixed vegetables.  There was one plate with white sauce and one with red.  There were also small pieces of tripe cut up among the stir-fry like dishes.  We were given soybean leafs to wrap the mixture in and kim-chi on the side.
The whole experience was really neat and the food was actually very delicious!  I preferred the white sauce to the red but both were good.  The shop owners had a lot of questions about who I was and if I liked the food. They were happy to know a foreigner liked their cooking and even offered me a fork.  I didn’t use it and the girls told me I have good chopstick skills.  I think they were just being nice! After our sondae experience we went out for patbingsu.  This was my first patbingsu experience and I hope not my last!  Patbingsu is a desert comprised of shaved ice with sweet azuki (red) beans and various other toppings.  Ours came in a mixing bowl with ice cream and fresh fruit.  This was another communal experience.  We all got long spoons and dug in! It was absolutely delicious!
It was a great day and I am very excited to spend more time with my new friends and learn more about Korea and great places to hang out and more importantly great places to eat around Seoul! 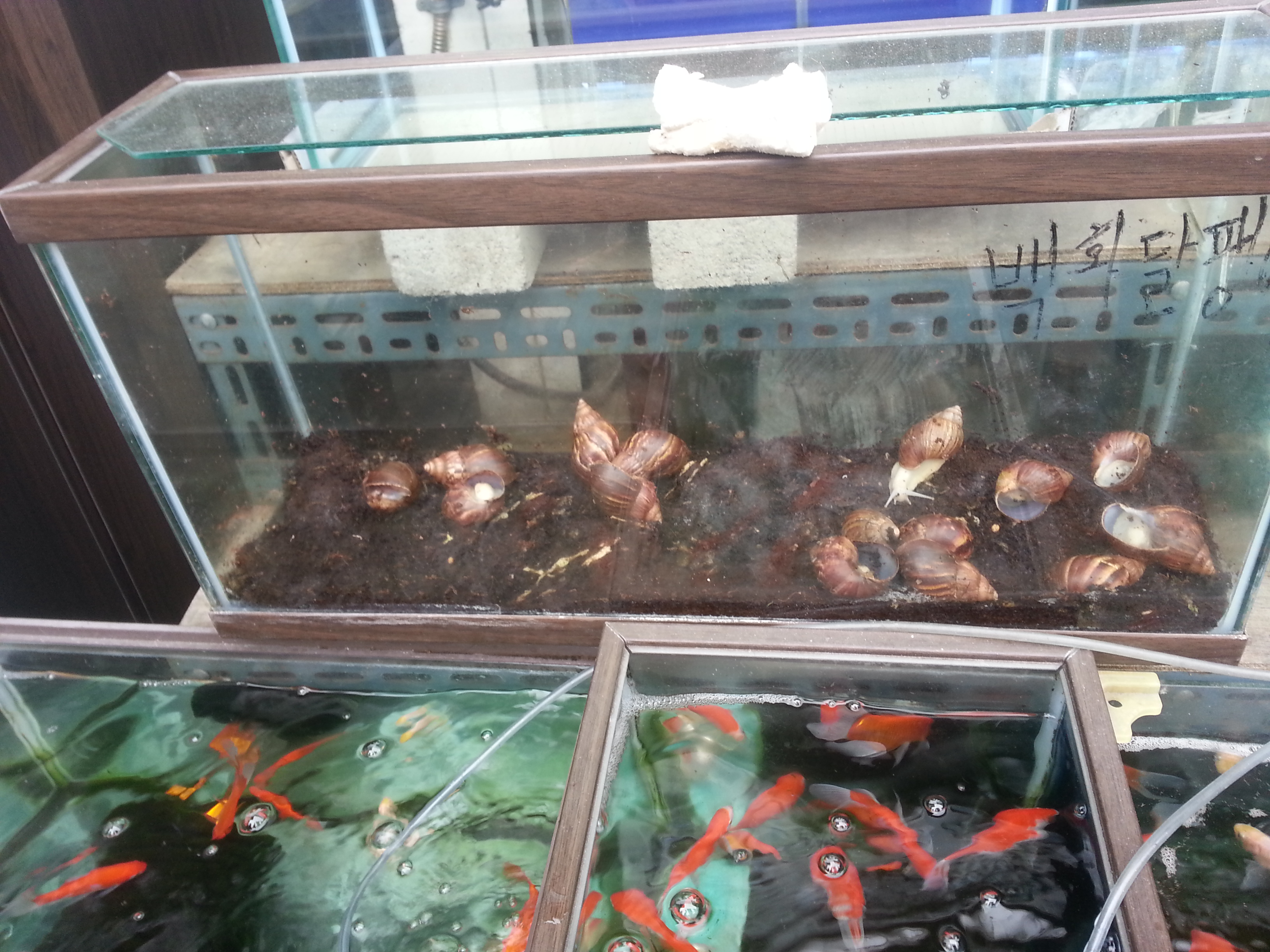