Skip to content
ELSEwHERE
May 8, 2013November 3, 2015 ELSEwHERE
Hanjeongsik
“Hanjeongsik is a full-course Korean meal with an array of savory side dishes. The most lavish of hanjeongsik traditional originated with the banquets served in the royal palaces or the homes of aristocrats. Usually the course starts with a cold appetizer and gruel, and the main dishes include dishes mixed with seasoning either grilled, boiled, steamed, fried, or salted. Hot pots are included as well, and after the meal traditional punches such as Sikhye(sweet rice punch) or Sujeonggwa(cinnamon-persimmon punch) and other desserts may be served. Actually the types or dishes served in the hanjeongsik vary significantly according to the season or region.”
Wednesday night, May 8th, we met our friend, from the Captains Career Course’s, mom. She is originally from Korea and is here visiting family. She took us to a traditional Korean Hanjeongsik style restaurant.  The restaurant is located off a main street in Itaewon but has a name written only in Hangul (the Korean alphabet). Under the Hangul lettering in English a description reads “Korean traditional restaurant.”  It is located on Hoenamu-ro just down the street from the Grand Hyatt Hotel in Itaewon 2 dong.

It was the most unique dinning experience we have ever had. The restaurant has individual rooms separated by sliding doors with rice paper walls. You take your shoes off when you enter the room. There is a raised ledge you back up onto then remove your shoes without touching the lower ground. When we sat down there were towels to wash your hands.
A nice thing about Korea, in contrast to Germany, is there is always water on the table. You are never supposed to serve yourself a drink. You serve others and refill their glass as soon as it is empty. If you do not want another glass, then you do not finish what is in your cup. When you pass something you always use two hands. Whenever you use one hand you are suppose to engage the other hand by putting it over your other elbow or something like that. It makes for extremely polite interactions.
Back to our meal.  Chopsticks is your primary utensil when eating in Korea.  A fork is almost never an option.  At this restaurant there were metal chopsticks.  These are a lot more difficult to eat with then the traditional wood chopstick, due to their non rounded shape, but common in nicer Korean establishments.  There is also almost always a large spoon for broth.  The flat wear set up was very nice at this restaurant, even having a small stand to rest the chopstick.  So nice, in fact, that Thaddeus (who doesn’t often pay attention to details) even made a comment!
Our host ordered us a bottle of Makgeoli  It is a traditional bottle of Korean rice wine, Makgeoli has a cloudy appearance in contrast with clear rice wines like Sake/Soju.  The one she ordered had ginseng in it.  It is very sweet tasting and has a milky appearance. Koreans are really into Ginseng for health benefits.  (They are also really into health and herbal healing) Ginseng is a root grown in the ground.  The older the Ginseng is the better it is for you.  They have Ginseng as old as 200 years.  A single root of that age group sells for over a million dollars.  A young Ginseng root is about six years old. The Makgeoli was served to us in little cups much like Sake.
The meal was arranged in courses AND we had course, after course, after course.  The food was in communal dishes and you took what you wanted and placed it on your plate.  It is almost impossible for me to remember everything.  We also could not possibly had identified or known how to eat a handful of things without having a native with us. Korean women waited on us the entire time, delivering each course fresh from the kitchen with perfect timing.  The courses were also multiple dishes.  A common way of eating in Korea is to have a main dish with lots AND LOTS of small side dishes.  The most common side dish being kimchi. There is about 200 ways to make kimchi  (at least.)
So let me see what I can remember eating…
Our first course was a small bowl of water kimchi. The green was a water-grown vegetable a lot like kale and it was served in pinkish vinegar based liquid.  Accompanied with this was seaweed fulvescens porridge or seaweed soup.  The seaweed soup was very strange.  I wouldn’t say it was bad but I wouldn’t order it again if I had the option.  It had a pasty texture and was very thick and a little bit stringy.

After that we had a delicious salad with sesame seeds. Their traditional dressing is sesame based and delicious.  With that came rolls that looked much like sushi but instead of seaweed on the outside they were coated with a rice paste paper in bright green, yellow and pink.  On a toothpick with the dish was a kind of pistachio.  These were very yummy.
The next course was glass noodles made out of a sweet potato paste with mushrooms.  These were delicious.  We really enjoyed them. Following this came out a spicy fermented fish, it may have been stingray.  We had this one other time and I had no idea what is was.  It is very strong and chewing the spinal column had a very strange effect on our sinuses. They are a little bit tough, but you can eat them. Weird! Next to this, was a cup of cold pouched octopus and shrimp salad.  Following this, came a big pot of clear soup with cabbage and huge oysters.  It was very yummy.
Next we had grilled eel that was seasoned with a fragrant spice I couldn’t place- almost flowery. Along side of this, came little fried rice paste patties and a fried tempura-like vegetable.  I have no idea what the vegetable is.  It is a weird shape and gray in color.  I’ve seen it multiple times in dishes here but have never come across it in America.

One of my favorite dishes was a halibut-like white fish with a chili paste on top.  They use chili paste for many of their dishes.  In this sense it is like American Ketchup. Along with this came a shell fish served in the most beautiful and brightly colored shell I have ever seen and a long shrimp on top.
The next course was very crazy.  It was a fermented stingray!  To eat it you took a slice of ray, piece of sliced pork and kimchi and made a lettuce wrap. The ray has the bones left in it and you can eat them.  You have to eat the whole wrap in one bite.  The taste of everything was very mild, but as you swallow you are hit with this overwhelming taste and smell.  It is kind of like a chemical taste. Very strange! I have never experienced anything like it.  I was the first to try this and our host gave me no hints about how my experience would be eating the stingray.  When I was hit with this potent aroma, as I swallowed, I almost fell backwards in surprise!
The next course  was a boiled beef rib.  This was SOOO good but I was full almost to the brim at this point.  I could only try a tiny bit but the flavors were sweet and the meat fell off the bone.
We thought we were done at this point.  The table was cleared and we were so full but the MAIN course still had not come out.  WHERE on earth were we going to put that food?  ha ha.  And with that said I may have forgot one or two more small things we did in fact also eat.

The final course was what seemed like a dried and salted fish that was recooked.  It was another interesting dish.  Along side the fish came about 9 small side dishes.  There were clams, tiny sardines, oysters, fermented cucumbers, a crab cut into pieces that you put in your mouth, suck out the meat then spit out the shells and lots of kimchi plates.  My favorite was the little sardines.  They were very flavorful!  With the main course came a traditional soybean (tofu) soup.  Our host said it is the Korean version of miso soup but it is was much more flavorful.  The soup came in stone bowls that actually cook the food when you place it in them.  Rice was served with this also.  The rice was purpled colored and came in a golden bowl that had a cover.  It looked like something the wise men would carry.  Very fancy. ha ha
Don’t worry there was traditional desert too.  It was rice balls covered in seasame and bean curd.  The balls had a gummy/gelatin texture. They were not too sweet  but it took me a LONG time to chew and swallow because of the texture.  This was also accompanied by a very potent lemon tea.
The meal was definitely only for the adventurous eater.  We loved the experienced and really liked the majority of the dishes.  Food is very healthy in Korea and even though we ate SOOOOO much and were sooo stuffed we did not feel weighed down like a typical American heavy meal.
After we ate dinner we met our host’s nephew.  He was a very corky character.  The only way I can describe him is like an anime character in real life.  He only spoke a tiny bit of English but was very nice.  He had not eaten yet so we took him to a Mexican restaurant near our house.  We live in a very international zone so there is food from all around the world.  Don’t worry visitors who can’t handle Asian food can go international. I think the majority of meals are still served with chopsticks though.  He had never tried Mexican before and was amused at the meal.  He got a burrito and had no idea how to eat it.

We had a great night and another fun Korean dinning experience.  I am still full this morning but eager to burn off these calories so I can try more Korean food!
Course Meals begin around $40.00 and go up to $100 depending on amount of courses and kinds of food.  There is also a $20 lunch option.
Click here to view this article in Stripes Korea 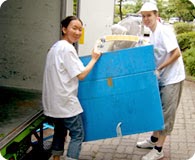